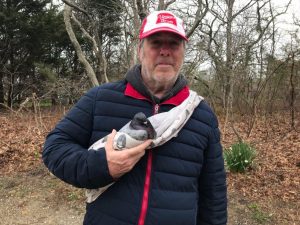 What have I done? I’m sitting at my desk, looking at a furiously flapping pigeon that I didn’t think would live through the night. I found him on the shoulder of Beach Road, near Big Bridge, the victim of a hit and run. I thought he was dead. After a fleeting moment of sadness, I told myself, “It’s only a pigeon.”

Then out of the corner of my eye I saw him raise his head.

I brought him home figuring I could at least spare him a slow death from hypothermia, starvation, dehydration and/or being picked apart by crows. At least I could give him a comfortable final night and a peaceful passing. But Walter — so named by my movie buff mother — rallied and now was desperately trying to fly out of the pen I had improvised out of a clear storage bin and bath towels.

I was having rescuer’s remorse. I knew nothing about pigeons, much less what to do with an injured one. Walter was in rough shape — his left leg was lifeless, his left wing was badly injured and abrasions covered his chest. Surgery wasn’t in my lockdown budget even if I could find an Island veterinarian to operate.

I set him down on my outdoor deck to see if he could take flight. It was instantly clear he couldn’t. It was gut wrenching to see the poor guy valiantly try to push himself up with his beak. The more he tried the more his frustration grew. In no time, three large crows gathered on tree branches above with Walter in their sights.

I picked him up and he immediately calmed, just like he did when I plucked him from the side of the road. Walter was a trusting soul.

I tried to find local rescue options but I struck out. By the end of Day 1 it was clear Walter’s life was in my hands. I had to step up.

When I was a kid my first career choice was veterinarian, but math and an allergy to cats had quickly squashed that dream. But now, after getting my veterinarian degree from YouTube U., I was able to splint his wing with special tape I’d used on my late dog Mona that doesn’t stick to fur or feathers. Walter never pecked at me, not even during my clumsy attempts at triage. Thankfully, he showed no outward signs of pain. Although he didn’t eat the night before, he was now devouring seed and chugging water.

Walter wanted to live. I was all in. 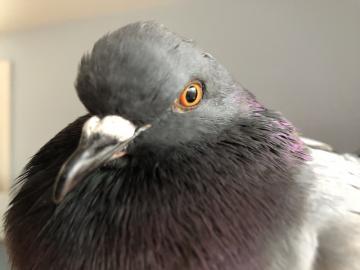 Day 2 with Walter was the one warm day we had in April. We sat on my deck and took in the sun. I’d never looked closely at a pigeon before. Why would I? They were only pigeons.

His neck and hackles flickered with purple and green iridescence. His eyes were two concentric shades of orange with black pupils. His wings had geometric patterns of black, gray and white, subtly mottled with mocha spots. He was a beautiful animal. And surprisingly soft.

Walter had personality. When I petted his head with my thumb, he closed his eyes, savoring every stroke. He looked at me with an inquisitive cock of his head when I talked to him. He was a good listener. He didn’t judge.

He liked to be held. He laid on his back and never stirred while I worked on his wee red leg. The only time he made a fuss was when I put him in his pen. He hated it. He always tried to escape. Concerned he’d make his injuries worse and eliminate whatever long odds he had to recover, I began to take him with me. We became inseparable.

He sat in my lap while I watched a movie and on my desk while I worked. I dug out a baby sling I used to carry Mona on walks during her last days and brought Walter on my daily sanity hikes. He was skittish at first. It can’t be easy for a bird used to gliding smoothly through the air at 50 miles an hour to adjust to the lumbering gait of a galoot with bad knees. But he quickly settled in. The only time he wigged out was when I walked on the Sengekontacket shoreline, directly across the pond from Big Bridge. Since pigeons can find their way home from 1,000 miles away, I have no doubt Walter knew he was in his old ‘hood.

Walter didn’t mind being in his pen when it was in a moving vehicle so we ran errands together. He relaxed in the crook of my non-drinking arm when I went to a socially distanced happy hour at the Masonic Lodge parking lot. Walter liked to hang with the boys.

He had eclectic taste in music, visibly perking up to the Ramones, Sly and the Family Stone and Beethoven’s 7th symphony. When a friend came by for a socially distanced outdoor visit, Walter followed our conversation like a spectator at a tennis match.

Soon, he developed a following.

By Day 3, “How’s Walter?” became the opening to every conversation and email I had with family and friends. It was a welcome respite from trying to come up with an interesting answer to “How are you?” after six weeks of grinding repetition. When I went down the rabbit hole of pigeon research, I found one surprise after another. It turns out pigeons are doves with bad P.R. Pigeon is the French word, dove the Nordic word, for the same bird, but chances are you’ll never find a soap or ice cream bar named “Pigeon.”

Pigeons are the world’s oldest domesticated bird — they appear on 5,000-year-old Mesopotamian tablets. Ancient Greeks used pigeons to send the results of Olympic Games from town to town, which is why they’re released at the opening ceremonies of the modern games.

Charles Darwin studied pigeons as he formulated the theory of evolution. He grew so emotionally attached to them that he stopped killing them for dissection purposes.

In the First and Second World Wars, pigeons saved thousands of human lives. They were kept on ships in North Atlantic convoys and if a U-boat attacked, a pigeon was released with details of the location of the sinking ship. In the World War II pigeons relayed information about German V1 and V2 rocket sites.

Project Sea Hunt, a US Coast Guard search and rescue experiment in the 1970’s, showed pigeons are more effective than humans in spotting shipwreck victims at sea.

They’re also excellent athletes. Pigeons can fly at altitudes beyond 6,000 feet at an average speed of 78 mph. B. F. Skinner, one of the most influential American psychologists, even taught pigeons to play ping pong. Check YouTube if you need confirmation.

And they are incredibly smart. Recent studies have shown they make top notch radiologists. They have the ability to distinguish benign from malignant human breast tumors, averaging 87 per cent correct scores.

In a remarkable bit of kismet, a study was released on Day 4 with Walter that showed, contrary to popular belief, New England-based pigeons do not interbreed with pigeons from the rest of the East Coast. The genetic makeup of East Coast pigeons changes in Connecticut, roughly at the same boundary that separates Red Sox and Yankee fans. Walter was one of us.

My respect and affection for him grew by the minute. But a decision had to be made. I couldn’t keep toting him around, especially when lockdown was over and I emerged from hibernation. I wondered what I’d want if I were Walter. It wouldn’t be living half my life in a converted storage bin. I thought about asking a farmer friend who butchers poultry if she’d give him a swift and merciful ending. God knows I couldn’t do it.

When I read that it takes 10 days for a splinted wing to heal, I made a plan. I’d love nothing more than to see Walter take flight but if he couldn’t fly after 10 days, I’d find a vet to humanely put him down.

Then, on Day 5, providence intervened in the form of a fundraising email from the New England Wildlife Center (NEWC) in Weymouth. NEWC is an impressive operation, housed in an $8 million, 22,000-square-foot facility. Dr. Greg Mertz, the “Odd Pet Vet” has operated on over 100,000 wild animals, 230 species of wildlife, and 100 exotic pets. If there was one place that could fix Walter, this was it. I went to the website pumped that we had a miracle in the making. I told Walter he might fly again after all. But the center was closed due to the pandemic. I called anyway and left a voicemail just in case.

Walter took the news well. We had dinner and watched Reservoir Dogs. Turns out he’s a Tarantino fan.

On Day 6, I got a call from Harry, an upbeat lad who said NEWC could indeed take Walter.

“I’m living here all week so just ring the bell when you get here,” he said.

I spent my last night with Walter watching Pulp Fiction. He fell asleep in my lap.

When we arrived at NEWC, Harry explained the socially distanced drop-off procedure over the phone. I petted Walter goodbye, put him in a small cage in the lobby, left a donation and drove away, satisfied I’d done everything I could for Walter.

I didn’t hear from the center that day. Or the next. I emailed, I called. Nothing. Finally, I got an email from Dr. Mertz. Walter had been euthanized. He had a fractured pelvis and other irreparable injuries.

For the most part, I had fared pretty well since lockdown began. As a writer and a closet misanthrope, I’d already been socially distancing for years. With a roof over my head and food in my cupboard I was in better shape than a lot of people. But the day I found Walter I was in a deep funk. After six weeks of solitude, I’d hit bottom. The hardest part of living alone is the unmistakable stillness in the air. You can fill silence with music, but the stillness — the stark absence of another sentient being — remains.

In recent years, my partner Jennifer and my dogs Angus and Mona had all died. The presence of their absence got heavier each day. It was like losing them all over again. Even though time had worked some of its healing magic, when Pink Floyd’s Wish You Were Here came on the radio, I was suddenly a mess. A kiss, a handshake, a lick from a dog seems like a quaint tradition from the distant past. I have no idea when I’ll hug someone again.

But for six days, Walter made me forget about all that. I got to wish him good morning, to hear him peck at seed and to feel his heartbeat in my hands. Walter broke the stillness. He pulled me out of my funk. He was a gift. Even though he was just a pigeon.