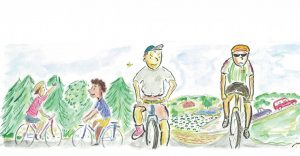 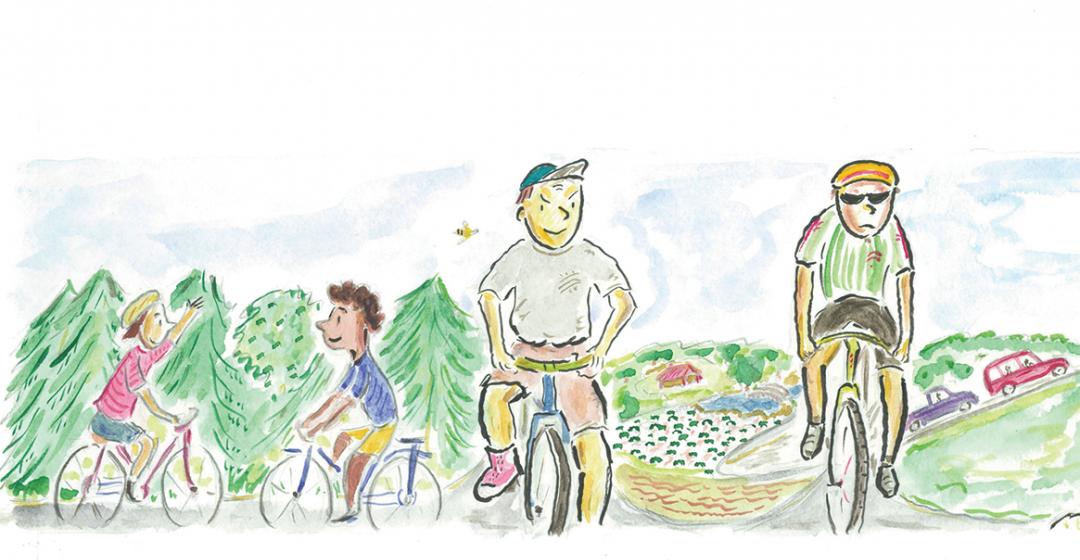 I am not a cyclist by choice. But since the third surgery on my middle-aged knees ended my running days, my cardio options are down to cycling and Zumba. So when spring finally arrived last July, I bought a used bike at Edgartown Bicycles to work off a few pounds of winter bourbon and beer before the autumn beer season began in August. Since then, I’ve been on a journey of discovery about cycling on Martha’s Vineyard, and about myself.

There are two kinds of cyclists. Group 1, my group, consists of people riding functional bikes, sporting a T-shirt, shorts, sneakers, and a baseball cap. I wear my Philadelphia Eagles hat out of pride, but more importantly to keep another bee from getting entangled in my hair, which once resulted in a near death experience on Middle Road, and must have looked hilarious to passing motorists, especially if they were Patriots fans.

I cannot bring myself to wear a helmet. No doubt, if I die in a crash, the first question some people will ask is, “Was he wearing a helmet?” Much the same as when someone dies of lung cancer they ask, “Was he a smoker?” Translation: “What was that chucklehead thinking?” Well, I grew up riding my Stingray all over creation, never wore a helmet, and somehow survived. And if an eight-ounce piece of molded plastic is the only thing that keeps me alive, I doubt the rest of my body will be of much use. It’s a bargain I’m comfortable with.

Group 2 consists of people who spent more on their cycle than I did on my truck. They wear aerodynamically sleek helmets and sunglasses that cost more than my bike. They wear flashy spandex festooned with corporate logos of companies that would never pay them to ride a bike but that look really cool. A middle-aged man in spandex is a bad idea. So much so, and this is true, that a new acronym has evolved – MAMS.

It’s not a compliment.

Group 2 also wears special shoes and sounds like a bad high school production of Tap! when they arrive en masse at Scottish Bakehouse for their après-ride soy milk lattes.

Group 1 tends to stay on the bike paths and back roads.

Group 2 rides the main roads and pretends not to notice the line of Subarus, pickup trucks, and SUVs stacking up behind them, their drivers hoping that a charging deer will take down one of the MAMS.

When Group 1 riders pass each other, we almost always nod or smile or wheeze or somehow acknowledge our commonality.

I admit to fleeting moments of jealousy when I’m gutting it out on a seemingly unending hill and someone from Group 2 effortlessly glides by me, the Perrier logo on his back soon a blur in the distance.

But my objective is not to look cool or to be the next Lance Armstrong. It’s to burn calories. I will never convert. I can’t justify the cost; I don’t like to click when I walk; and I will never, ever be a MAMS. But I do now consider myself enough of a cyclist to pass along a few flappy cotton tips for the would-be Island peddler.

Beware the bike paths. Riding the bike paths are safer than riding on our narrow, winding roads, but they come with their own distinct hazards. The paths in the state forest are rife with cracks large enough to burst a tire or bruise a kidney. They’ve been painted with black tar, which gives the impression someone thought about fixing them but decided a warning sufficed.

The paths along Edgartown–Vineyard Haven and Edgartown–West Tisbury Roads are mostly free of these crevices, but there’s a gauntlet of cars and trucks that can jut out at any moment from the side streets. The wise cyclist will slow down and check to see if a two-ton metal obstacle is about to cross his or her path. However, there are times when the cyclist is lost in thought – wondering things like “How do you remove club soda stains?” Or, “Is an OB resident an Oak Bluffer or an Oak Bluffian?” – and suddenly find him or herself milliseconds from impact.

My closest brush with death came early one morning on Edgartown–Vineyard Haven Road. I’d actually had the wherewithal to get out of bed at the crack of dawn and saw nary a car on my ride. I was about to pass by the Chapman, Cole & Gleason funeral home, and since it was well before business hours never thought to slow down when suddenly a dark SUV pulled out in front of me. There was no way to stop in time. The thought of letting go and attempting a Starsky and Hutch slide across the hood actually flashed through my mind. Just before impact, the driver saw my wide-eyed terror and pulled onto the road, where luckily for all of us no one was coming.

Note to self – people die twenty-four hours of the day.

I was lucky not to become a client of Chapman, Cole & Gleason.

If I had been, no doubt people at the closed casket viewing would have asked, “Was he wearing a helmet?”

Also worth remembering is that communication is key.

Passing other cyclists is a tricky proposition. Typically, you say “On your left,” so riders will not swerve in front of you and send you both to the hospital, where you will invariably be asked why you weren’t wearing a helmet.

If you warn people when you’re too far away, they don’t hear you.

If you wait until you’re very close, you can scare the bejeezus out of them, causing them to swerve in front of you, sending you both to the hospital, where you will invariably be asked why you weren’t wearing a helmet.

I decided the best solution was to go old school and get a bell. I’m confident enough in my manhood to signal my presence with a little tinkle. It’s a happy sound.

A bike horn is also a happy sound, although many people associate the sound with clowns, and if you pass someone who’s afraid of clowns, they may swerve in front of you, sending you both to the hospital, where they will ask why you didn’t just say, “On your left.”