Lifted By a Broken Wing 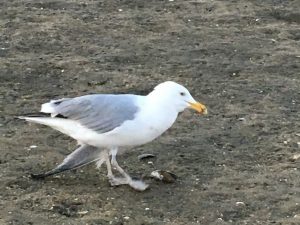 Reprinted from The Vineyard Gazette (click here for full comments).

It was the day after the first of four northeasters pummeled Martha’s Vineyard last March. I was on my daily commute that took me on Lagoon Pond Road and past the shuck shack where bay scallopers deposit heaps of empty shells.

Atop the pile a seagull with a broken left wing was scavenging for scraps. When the shells are fresh, the mound is covered in gulls. He was alone. The pickings were slim.

With a second, more severe storm already barreling up the coast, I knew this bird had some rough days ahead.

After an initial rush of pity, I told myself to stay out of it and let nature take its course. But the thought of this wounded animal enduring a slow, painful death, from starvation or hypothermia or both, flashed through my head all day. When I left work, I collected scraps of sliced turkey and pieces of pizza crust, hoping I’d see him on my way home.

It was getting dark and a bitterly cold wind was whipping off the Lagoon when I arrived with my care package. The gull was still working the shell pile.

I don’t know why I assumed he was a male. It was a gut feeling. Maybe it was because he ate everything no matter how disgusting. Maybe because he was filling the void left by the recent death of my dog Angus.

When I approached with food, he skittered away. I tried reassuring him and then tossed him scraps of turkey. After a tentative approach, he gobbled them down.

I got close enough to get a good picture, figuring I’d post the picture on the Islander Bird Alert Facebook page for advice or assistance.

A few people replied they would swing by with food.

It gave me pause. I knew he had a valid point. Nature can be cruel and we shouldn’t mess with the natural order.

But I also knew I couldn’t drive by this wounded animal every morning and ignore its plight.

More to the point — why does letting nature take its course exclude us from the equation?

Empathy abounds in the animal kingdom. Primates, dogs, elephants and even killer whales show it. There are many stories of cross-species compassion — a favorite of mine is about a rescued goat who adopted a rescued blind horse and led it to pasture every day.

I decided to help him through the winter, and if he made it, to back away when warm weather arrived.

During the next northeaster I found him taking shelter from the blowing snow, hunkered down behind a boathouse, alone. He was always alone. He gobbled up the haddock I’d found in the dark recesses of my refrigerator.

I never threw away food again, no matter how questionable the freshness. One of his favorites was raw chicken liver and gizzards. Once I tossed him a turkey neck, figuring he could peck away at it, but in a stunning display of muscle control, he wolfed it down in its entirety. Sometimes I fed him some of Angus’s dog kibble that I hadn’t been able to part with. When other gulls tried to horn in, he fought them off, three, four at a time. He was a scrapper. I admired him. He deserved all the help I could give him.

Animal rescuers don’t name wounded critters so they don’t become too attached to them.

But it was too late for that.

My boy needed a name.

I thought about Lefty, but figured the irony would be lost on him. I thought about a Vineyard version of Jonathan Livingston Seagull, something funkier, with more spirit and grit, befitting the gull that is proudly front and center on the Martha’s Vineyard secession flag.

Over the coming months Juan was near the shuck shack most mornings, sometimes near the side of the road, sometimes behind a forest of phragmites on a small spit of land that juts into the Lagoon. Over time he began to recognize my truck and would approach in his comical waddle when I parked, only to skitter away when I greeted him. Our dance evolved over time — he approached, we exchanged pleasantries, I threw food, he wolfed it down then skittered away.

I discovered that Juan had incredible beak-eye coordination. He caught everything I threw his way.

Sometimes I wouldn’t find Juan at his usual station, only to see him bound out of the phragmites as I walked back to my truck, as if to say, “Surprise!”

More and more, I looked forward to our morning meetings. They became a peaceful moment of grace before I went to a job that was spiking my blood pressure to all-time highs.

Once, after a particularly soul-crushing day, I was driving on Lagoon Pond Road looking forward to seeing him when, to my horror, I saw him charging down the middle of the road in my direction. I couldn’t tell if he was trying to take flight, or if he was in a fit of pique, annoyed that I was late. I pulled over and tried to coax him out of the road, using his favorite food, smelts from Net Result.

He refused to budge. A pickup truck came barreling down Skiff avenue and blew through the stop sign, on a direct collision course with Juan. My shouts to the driver went unheard or unheeded. I watched petrified, but at the last second Juan took flight with his broken wing, just enough to avoid becoming road kill. Then he calmly walked in my direction and waited to see what I’d brought him.

I scolded him to never do that again. A passing pedestrian looked at me and quickened her pace.

Over time, I found out that Juan had other guardians.

A friend has an office on the other side of the Lagoon. When I told her about him, she told me she’d been getting visits from a seagull with a broken left wing and that she fed him on occasion.

A woman started leaving a bundt pan filled with fresh water by the shuck shack. She left her name and phone number and I called her. We bonded. Although I knew gulls drank salt water, I saw no reason to dampen her good will. Turned out she also had leftover dog kibble.

As summer rolled on, Juan showed up less and less. Now it’s late September and I haven’t seen him in a month. I hope he’s become self-sufficient. But I know nature might have taken its inevitable course.

Wherever he may be, it feels good to know I helped him get him through the unforgiving Vineyard winter.

Juan also helped me get through a rough winter — over the sadness of losing Angus and through the job that had come to a merciful end.

I could have kept driving by the shuck shack.

I think Juan was too.